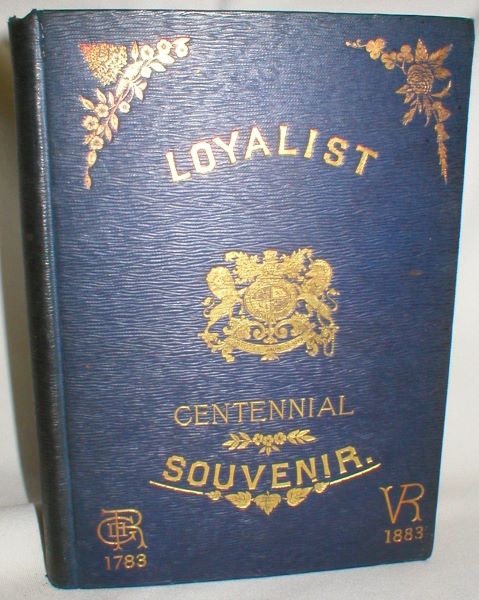 Original navy cloth on blindstamped boards decorated and lettered in gold. Previous owner's bookplate and stamp. The official account of an all-out celebration of the landing of the Loyalists at Parrtown 100 years earlier. Many gatherings and celebrations are described in detail, and even the lineups of various parades are carefully noted. One procession, called the Polymorphian Procession, included not only police, bands, and military personnel, but also the sloop King George drawn by four horses, a Bridal Party, the Calithumpian Club Banner, and a Two-Headed Giantess, Driven by a Monkey ! The Fire Brigade organized a tournament of races and competitions attended by firemen from far and wide, and their parades featured a "Poor House on Fire" among other themes. There is much information on the Loyalist Burial Ground and some of those buried there, with several headstone inscriptions. Apparently the whole series of observances was organized by the New Brunswick Historical Society, which had been organized in 1874. It was they, too, who caused this record to be published. Laid in is a news clipping from the 1930's making reference to the observance of Queen Victoria's Jubilee 50 years previous. 183 pp with index.