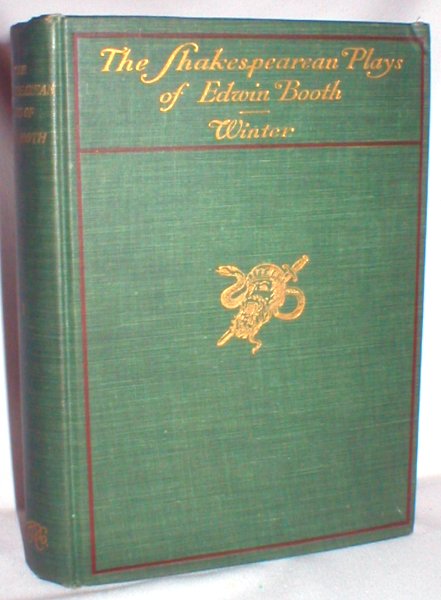 The Shakespearian Plays of Edwin Booth (Vol. I)

Original green cloth lettered in gold with red border on boards. Hamlet, Macbeth, King Lear, Julius Caesar, and Merchant of Venice. Brother of the infamous assassin, Edwin Thomas Booth was believed by some to be the foremost Hamlet of the 19th Century. In 1869 he founded Booth's Theatre in New York. He began work with his father, Junius Brutus Booth, and sometimes acted as his stand-in. A very interesting incident in which Edwin Booth saved the life of the President's son, Robert Lincoln, who had fallen from a train station platform (about 1864) , is recorded in a letter from Robert Lincoln to the editor of Century Magazine in 1909. Previous owner's name and date (1899) is the only writing, and there is no damage save for one bumped corner tip. Individually paginated: 136, 104, 119, 103, and 109 pp., respectively, each with related appendix. Untrimmed fore and bottom edges. NOTE: See Vol. III, Miscellaneous Plays of Edwin Booth, listed separately.

Title: The Shakespearian Plays of Edwin Booth (Vol. I)

The Shakespearian Plays of Edwin Booth (Vol. I)