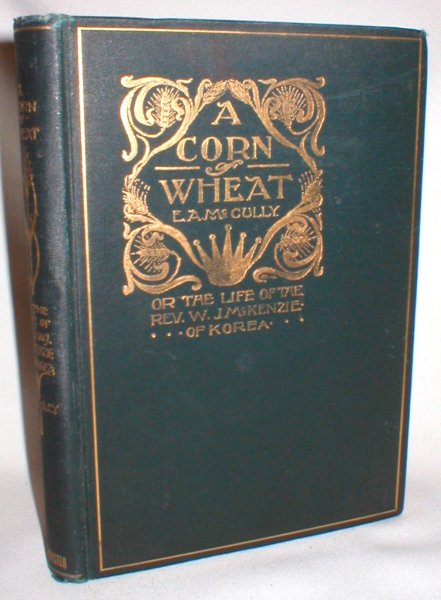 A Corn of Wheat; Or, The Life of W. J. McKenzie of Korea

By: McCully, Elizabeth A.

Original dark green cloth on boards. Previous owner's name. Portrait front. and five additional photos present. McKenzie began life as an all-round athlete and scholar in Cape Breton, where he began teaching school at age 13. Influenced toward religion by his grandfather, he attended the Academy at Pictou and then Dalhousie College, Halifax. By this time he had decided upon his life's work. After a mission tour to Labrador, he turned his efforts toward Korea. Photos in the book include one of the church at Sorai which was built under his leadership. A constant worry were the Tong Haks, a roving band of outlaws. 290 pp.

Title: A Corn of Wheat; Or, The Life of W. J. McKenzie of Korea

A Corn of Wheat; Or, The Life of W. J. McKenzie of Korea