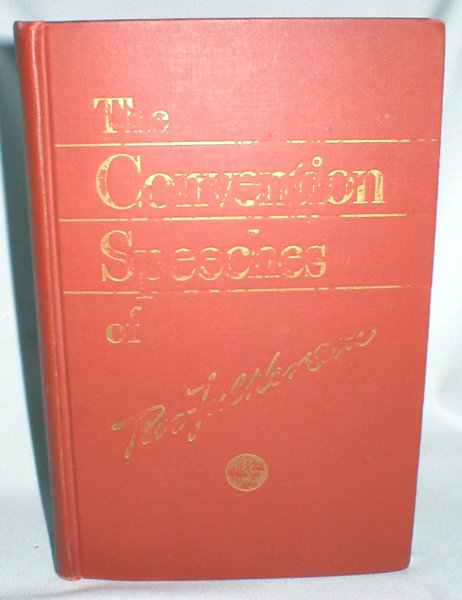 The Convention Speeches of Roe Fulkerson

Original reddish-brown cloth on boards. Cover title rubbed. No writing except "1946, Christmas Greetings, Bill Kotchapaw "(signed). I twigged to the name Kotchapaw because I lived in Prince Edward County, Ontario, for many years and had heard it there. Roe Parham Fulkerson was the first editor of Kiwanis Magazine, and was known as a popular speaker and writer. Among his credits is the first appearance in print of the words, "He Aint Heavy, He's My Brother," which was later chosen as title of the popular song as well as the motto of Boystown. William Gorsline Kotchapaw was born in Picton, Ontario, area, but since his elder brother inherited the farm he went to Winnipeg, where he worked as a shoe salesman. He served Kiwanis for 43 years, and was President in 1944. He retired in 1965 as Vice President and General Manager of Fort William Elevator Company, and died in Winnipeg in 1971. This book contains several inspirational addresses given by Fulkerson at various large Kiwanis conventions through the 1940's. Racial slurs. 165 pp.

The Convention Speeches of Roe Fulkerson